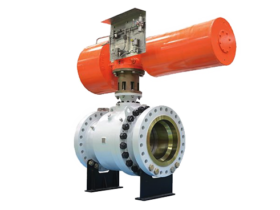 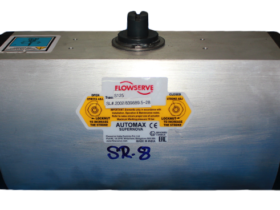 A valve is a device or natural object that regulates, directs or controls the flow of a fluid (gases, liquids, fluidized solids, or slurries) by opening, closing, or partially obstructing various passageways. Valves are technically fittings, but are usually discussed as a separate category. In an open valve, fluid flows in a direction from higher pressure to lower pressure. The word is derived from the Latin valve, the moving part of a door, in turn from Volver, to turn, roll.

The simplest, and very ancient, valve is simply a freely hinged flap which swings down to obstruct fluid (gas or liquid) flow in one direction, but is pushed up by the flow itself when the flow is moving in the opposite direction. This is called a check valve, as it prevents or “checks” the flow in one direction. Modern control valves may regulate pressure or flow downstream and operate on sophisticated automation systems.

Valves have many uses, including controlling water for irrigation, industrial uses for controlling processes, residential uses such as on/off and pressure control to dish and clothes washers and taps in the home. Even aerosol spray cans have a tiny valve built in. Valves are also used in the military and transport sectors. In HVAC ductwork and other near-atmospheric air flows, valves are instead called dampers. In compressed air systems, however, valves are used with the most common type being ball valves.

Floating Ball Valve
In a floating ball valve, the ball is held in the position by the compression of the two elastomeric seats against the ball. The ball is free to float inside the valve body.

Trunnion Mounted Ball Valve
Trunnion mounted valve is a solution to the problem of excessive torque required by a floating type valve in high-pressure service. A short shaft like an extension which is known as a trunnion set in the body. In this design steam and ball work as a single unit. The ball is supported by two floating or spring-loaded seats that remain in constant contact with the ball